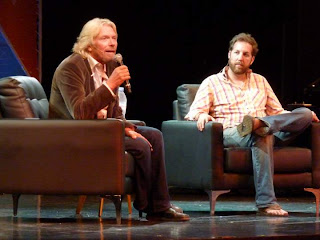 Some 999 odd lucky others and I spent last weekend together on a cruise ship that left the port of Miami, and had no idea where it was going. You see, it was the journey that we were there for, not the destination. We went to network and listen to speakers like Richard Branson interviewed by Chris Sacca, Russell Simmons, Gary Veynerchuk and Tim Ferriss. These names were our hook to come, and they were good, but what turned out to be better was being in the company of the most amazing A-type scrappy entrepreneurs from around the world. This all took place on an invite only event called Summit at Sea, produced by the team at summitseries.com on Twitter @summitseries & hashtag #SASea. I was lucky to have several friends from prior conferences like Kinnernet on the boat, and even luckier to have my two best friends invited too, on coincidentally what I call my best birthday. Ever.

Before getting into my story, I must thank the team of Jeff, Elliott, Ron, Brett, Jeremy, Josh and all the other staff who made sure we were hydrated, stimulated and engaged on our three day tour. They spent untold man and woman hours converting a stuffy cruise ship into a conference and concert hall, dance club and platform to bring innovators together like no other conference I have attended. They achieved the transformation with flying colors and glow sticks. Even the staff on the ship were blown away by our energy and enthusiasm.

This venue was perfect for me – you see, I love networking. I live for telling and hearing stories from entrepreneurs. As a lifetime technology guy, I started going to computer club meetings before I could drive myself to them and have always been into the human connections around technology. Anything to make connecting better or faster is right up my alley. Oh, and thanks for the rides to the computer club so long ago mom and dad!

Back to the matter at hand. Meeting a thousand people, even within the contained hull of a 12 story ship turns out to be impossible even for an extravert like me. There are just too many interesting people to meet and even miss-matched conversations, activities and cat-naps taking precious time out of the day and night. Since the networking went on throughout the night, the mantra “I’ll sleep when I’m dead” became crucial to maximize connections.

So how could we optimize this? All attendees were given a Poken which is simply a hand shaped, USB charged and synced plastic gadget that you can high-five with another same to exchange device IDs with someone else. These IDs are mapped to online user profiles, so when you plug yours into your computer, a website will match your collected IDs to human identities. However, two days into the event they started glowing yellow then red on the last day on the ship. Was the battery dying? I thought so, but no. We were coming up against the limit of just 64 identities being able to be stored within the device.

Worse yet, it was hard to see the green acknowledgment light in the sunlight of the Caribbean, so several connections that I made during the day turned into ghosts in the machine. My real issue was the lack of a real-time referral engine within the device. As a “connector” I frequently bring like minded individuals together. As I mentioned miss-matched connections above, those who did not relate to my likes and interests, were frequently people whom I would like to connect to my friends who share their interests. There was no way to do this on the Poken, a gadget that is no more than an infrared code exchanger.

As we were at sea, with limited (read: costly) Internet connectivity, the offline nature of the conference was both a positive and negative. We were thankfully forced to interact with one another face to face versus use our “digital adult pacifiers” aka smartphones. There was an intranet on the boat with information on the attendees, but our Poken was not attached to this for real-time info. If you wanted to look people up, you had to do so manually on your own accord. There was no “who is relevant to me nearby” that I dreamed of.

So the problem lies there. Even if you could get around and talk to 999 other people, you could only hold a fraction of them in your electronically augmented memory bank then had to remember whom you wanted to connect to your friends and colleagues. What we needed was an online or offline, forwarding capable device with a filtering mechanism for matching like-minded individuals. Simple?

Well, it’s not as hard as you think it would be with the use of our proximity platform. The solution goes like this; Identities of the attendee smartphones wirelessly broadcast their IDs, much like the Poken, but at a range that would be readable by people that you could see within a room. Metal walls of a ship would likely block these signals between walls and floors. This means that the “filter” of people in attendance to a guest speaker would be a first level of like mindedness among attendees.

These IDs would too be matched back to identities via the intranet or Internet, but thanks to the screen of a smartphone, and the intelligence of a back-end database with filtering done at a further level. You could find people who match your interests and chose whom you wish to speak to in an effort to be more efficient with your time. You could also forward connections to those who are not a “match” to your friends who are. An artificial intelligence layer on your mobile phone could sift through hundreds of people in a room effortlessly and give you the dozen or two that you could benefit from meeting. Now I do not envision this as a replacement for human connections and serendipity, as I made some amazing connections with people who are not in my domain expertise, but as they say time is money. With what became a “way too short weekend” we could never meet all 1000 great people on the cruise.

So there is a quick productization of the ultimate human connector and time saver. This has been attempted with GPS satellite geo fencing, RFID “radio tags” and QR codes; but our platform enables your everyday Android and iPhone to achieve this type of proximity connectivity with just our intelligent engine inside a room. Without new hardware or a clear view of the sky.

So what do you think? Are you ready for the future of human connections at your next conference?