Live from CTIA 2013 aka the Internet of Things Conference 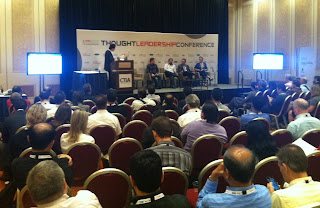 This year at the Cellular Telephone Industry Association’s annual conference, the Internet of Things was the spotlight buzzword.  NewAer sat on two panels along side huge companies like AT&T, Verizon and Cisco to give our take on the IoT topic.  The first was with CTIA and the second with Fierce Wireless, a group that covers the industry.

After the question of “what are these things” we agreed they are sensors for heart rate monitors, wearable technology like the Nike Fuel Band and FitBit which collect data and exchange as low-bitrate devices.  For communication, they can attach to the Internet themselves via WiFi or “leach” off of a companion device to mostly push data to a website or device where their data can be visualized.  Some examples like Google Glass use WiFi when they are inside of a space to communicate directly, and use Bluetooth when they are only near a mobile phone.  This got me thinking about all of the “things” on the Internet since the dawn of the commercialization of the network.

The first “Internet Things” in the early 90’s were computers boasting dial-up modems, requiring monthly recurring payment for text access. AOL and Compuserve then brought the masses online in a hosted format with text and pictures similar to what we understand the Internet to be today, albiet much slower and with low-resolution graphics and postage stamp video. There was no shortage of concepts to explore the power of the web, from Microsoft’s purchase of WebTV (making your TV an Internet Thing) to free PCs subsidized by virtual ads that plastered display frames while people surfed. The progeny of this work appear today as miniature devices, dubbed IoT. For the purpose of my life’s work, IoT is a small device that leeches onto a larger device via Bluetooth LE, WiFi or other low-power feeds like Zigbee to gain access to the Internet to push or pull data via a smartphone app or web database.

You may sense some deja vu, and you’re right; a big idea from a small Texas company explored the leeching gadget concept way back in 1997.  (That’s pre-DVD, pre-flash drive and even pre-camera phone. The digital cowboys of Digital:Convergence worked with Forbes and Wired Magazine to launch the world’s first IoT device, the CueCat. This LED-glowing, feline-shaped, any-barcode-reading gadget was mailed to each publication’s subscribers, or could be picked up from any of the then-7,200 RadioShack locations. Its purpose: interactivate anything with a barcode, or geek speak for “scan the barcode on a magazine or product and be delivered to a website.”  This was a truly magical experience then. Remember, Google was just a garage project that was helping you “feel lucky,” Yahoo was the primary method of online research as a human curated directory, and “web portals” were the big idea at the time. There were software applications that could achieve similar results with USB cameras, which were again accessories, but this was the first widely deployed device whose clear purpose was to bring instant Internet from any household good….as long as it retained its barcode.

Many stories have been written about this device as a failure, a has-been, a waste of a strategic investor’s $205 million dollars – however, not a single VC was harmed in the fundraising, as strategic partners found great value in driving further content from their physical product reach. In fact, it was more than a dozen years ahead of itself. Today, smart phone cameras decode the same barcodes that this device read – ISBN, UPC, EAN – plastered to products for the retail supply chain. NFC is still a dream, RFID is used only by the supply chain industry and the QR code is arguably a failed marketing attempt outside of Japan.  And probably failed in Japan now. One bright spot: I’m addicted to the magical experience Shazam provides around music, partially because it reminds me of the NBC launch of CueTV, our attempt at audio decoding in the era of “Must See TV.”  But I digress down a memory lane.

We attempted to build an operating system for the Internet with audio and visual codes that we called Cues, as the stimulus to enable the actions.  Audacious as it seems, the technology and patents created are still being used today, albeit inside of Android and iOS phones as software vs. our hardware, feline approach.

So if the iPhone has rendered so many secondary gadgets like GPS receivers obsolete, and iPad or Android tablets have taken the retail steam out of portable DVD players and digital picture frames, why do so many IoT gadgets appear on crowdfunding sites like Kickstarter so often? Why do similar ‘relics’ continue to captivate consumers and investors when Wall Street believes they should catch dust in the garage?

The answer is two-fold. First, despite what marketing campaigns and current habits tell us, we do not want to, and will never want to carry a phone with us all the time, like when jogging or working around the house. Devices like the Nike Fuel Band or Fitbit collect data from our movement while awake and our patterns of restlessness as we sleep. They’re developed with design in mind, and they’re far sexier than strapping a smartphone to your wrist.  Or putting Glass on your face.

Second, we technologists dream of a more-than-smart house like the Jetsons’. For me?  I want the front door to unlock as I approach… my Nest thermostat knows I’m inside earlier than normal and turns the air conditioning down to a lower temperature without my body triggering a motion detector…and I want the convenience to extend outside of my house as I park my car at the airport for the fourth time in as many weeks. I don’t worry about remembering where I left my car, because my car will remind my smartphone where I parked it.

All of these devices have WiFi, Bluetooth or cellular radios, each of which depend on pairing and communication technologies. I believe the next evolution of the Internet of Things will be built upon a discovery, and our team has a framework to make it happen.

In 2010 our team at NewAer, built an open, hackable engine to power those automagic actions above. We make wireless devices aware of another device. Our SDK can reside in iPhone applications or on laptops or Android tablets, enabling them to become “IoT aware.”  It’s a scripting language to empower applications, networks or devices to become intelligent with an easy framework for developers to code upon.

Our partners and investors are Alcatel-Lucent (the original Bell Labs), Deutsche Telekom (operating worldwide as T-Mobile) and Intel Capital, whose proceeds from their chip fabing company Intel likely powers the smattering of computing devices around you at this moment. These companies see us as a next generation network enabler to let devices reroute end points on networks…. like ringing your mobile phone calls on your conference room speakerphone when you’re mid-meeting, or beginning a movie on your television, then finishing it on your tablet as you leave the house thanks to WiFi or Bluetooth ‘fingerprints’ changing, and the devices reacting to the new environment.

Our team is building our own showcase of next generation applications to help share any content to a device nearby, automate actions in a smartphone and prevent people from losing their stuff. We believe devices should be truly smart when they become IoT aware.

For us, a day living among the Internet of Things looks like this:

I urge you to think about proximity over location- we’re a mobile society and someday soon, fixed geographies will be trounced by elastic location.  Lets build the future of IoT today.