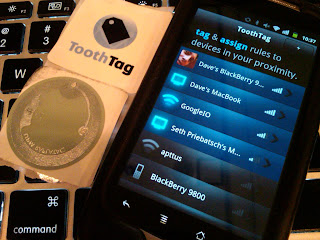 Asia gets all of the cool stuff first like tiny laptops (we called them netbooks – they were cool before tablets became vogue) and mobile broadband. Even QR codes that could launch websites with camera phones, as typing URLs with their alphabet on 10-key numeric phones was a pain. Now the hot thing is Near Field Communications (nicknamed NFC because geeks need acronyms) for commerce or information about stores. We think NFC is neat, but much bigger than retail – so we figured it was time to make them cool.

In America, as I write this, the Nexus S from Samsung has the necessary hardware to read NFC tags. The user experience is really boring though. You don’t need to launch an app like you do to read QR codes, just touch a NFC tag, and see content from the tag. For us at Team NeuAer, that wasn’t cool enough. We wanted to actually DO THINGS based upon our phones sensing a tag, just as we automate actions from WiFi and Bluetooth. Plus, we wanted to more than just basic things within the phone like play a song, but to also hook into web API’s like check-in on foursquare. We thought about even grander ideas like setting triggering your lighting and playing music in your house. While we are not going to provide you the home automation system, we are going to let you hook into yours! We are opening our proximity platform around ToothTag. With Android at Home announced today, it seems that we weren’t the only one thinking about automating your environment.

This marks the first time that our ToothTag engine for proximity plumbing is available for developers to create their own web services that can be executed based upon your smartphone seeing another wireless radio. You can write your own apps in your favorite language, or use our examples built in Ruby on Rails or Python and can host them at Heroku or Google App Engine online. Both of these are FREE services (you can thank us later) for you to get started immediately. ToothTag will act as a gateway to trigger your own services based upon seeing any wireless technology that the phone can. All automatically.

At the Google IO conference in 2011 we are also giving away thousands of ToothTag stickers with NFC chips inside; for you use to build your own actions to automate your life. Of course you can perform our default actions, but better yet, we want you to write your own. Because we want to give you the tools to create the next generation of automated actions to make your smartphone truly smart.

We’re excited to see what you come up with! So hit the proximityplatform.com link below and show us what you’ve got!

P.S. Once you scan a few NFC tags, you’ll get some interesting names; vs the pseudo-random bytes that identify a tag by default. We figured those tag numbers were boring and came up with our own naming convention. Let us know what we did to come up with this schema, via the comments.

Links:
m.toothtag.net – Our download landing page embedded on the NFC tags for Google IO hosted by our friends at www.getsharesquare.com”
Here is www.proximityplatform.com – Our developer page for YOU to make web apps that run inside of ToothTag

And if you need a NFC capable Android device, Best Buy just put the latest version of the 4G Nexus S up for $149 too!