Minority Report meets The Terminal with NewAer and American Airlines

Like many business travelers, I fly hundreds of thousands of miles per year to meetings, conferences, never-enough vacation and holiday family gatherings. We have most airport codes memorized, and the Great Circle Mapper shows friends how ridiculous the travel months are, as the bird flies so they say.

Even though my flights are a “sequence of one-way destinations” that differ, one thing that stays the same, besides bad airport food, is terminal riddled eye-charts, whose monitors list flights along with gates and departure times. Worse are code-share flights, or those where two airlines use the same airplane under differing flight numbers, requiring travelers to wait for the scrolling information between the two to confirm a gate. 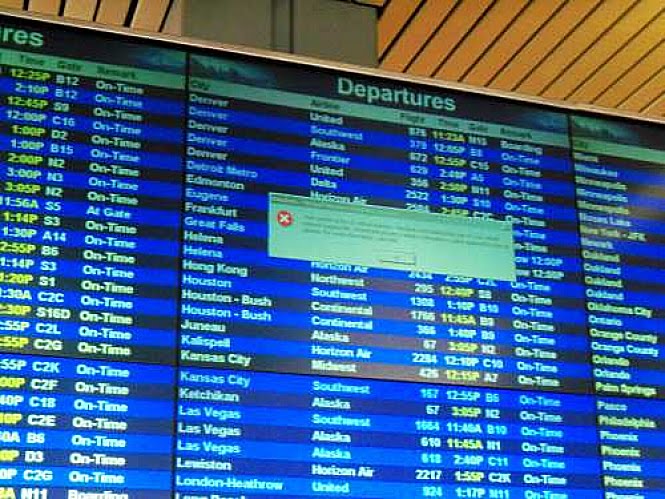 We at NewAer dream of a world where the signage in the airport will “see us” via our wearable or mobile phone’s “beacon” and message to us. We want the right information, at the right place and the right time automatically like a concierge would, such as “Dave, you’ve landed at gate B7, which is right next to your favorite coffee spot at B5, and you’ve got 30 minutes to get to B12 before boarding for your connection to Dallas on Flight 2701!” Or simply, “Welcome to San Francisco! You can pick up your bags at C7 on the lower level, and your favorite Zinfandel is down the hall at the wine bar on the left.”

This road warrier’s dream became a reality thanks to our Kiosk product, and teaming up with Four Winds Interactive
along with the LG Display group, to build Proximity Signage for American Airlines under the Wearable World in-flight (ok, so technically we did our debugging in the air) hackathon.

Travelers would walk up to a sign in an airport and see this private message, when they are close by:

Engadget’s Brad Molen explained the vision and even tapped into privacy concerns a bit, something that we have cared about since before writing a line of code for the product: “To address privacy concerns, as soon as you walk by the sign, the personal messages are deleted and replaced with a generic screen.”

The Wall Street Journal covered our dream in Scott McCartney’s section called The Middle Seat, my worst nightmare of flying. The July 17th 2014 paper’s front-page story captures our vision: “I walk up to the sign and it knows me,” where to be and how much time I have to get there.

Ironically, I write this at 30,000 feet on yet another flight, to yet another conference and I cannot wait for our technology to be deployed at the next airport that you and I land at. And I hope that they have TSA PreCheck…

The original Engadget and Wall Street Journal stories are captured as PDFs below: